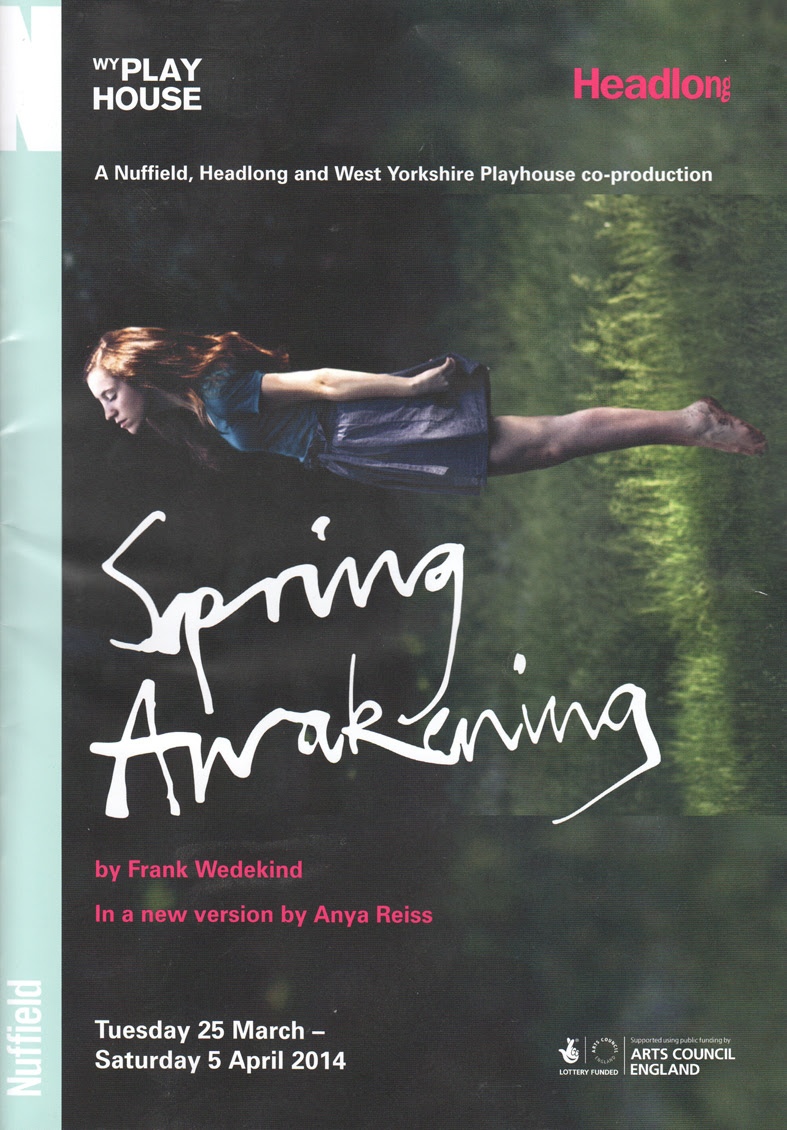 Anya Reiss's update of Frank Wedekind's 1891 classic is a Nuffield, Headlong and West Yorkshire Playhouse co-production. I saw it at the Nuffield, which seems in good shape under new management. How pleasant to sit among a large and largely younger audience who were clearly enjoying themselves. Reiss's version is not a translation but a re-creation, moving Wedekind's radical piece about dawning sexual awareness to the contemporary world of sexting, cyber-bullying, and slut-shaming (a new one to me, but helpfully explained in the programme), alongside more perennial issues of rape, masturbation, abortion, suicide and coming to terms with homosexuality. I suppose a version that was simply a tame and reverential account of a classic would miss the point of the work, which is to provoke and expose matters which we parents would normally prefer to stay under the carpet. The whole production, 105 minutes without an interval, moved with great élan, in a trademark (how soon it becomes diminishingly familiar) Headlong style of digital projections, thumping soundtrack (which can be listened to in sequence on YouTube, a nice new production touch: I'm tapping my foot to Mickey Avalon's jolly number 'My Dick' as I write) and aggressive lighting effects.


While I was taken by the zing of the work (and struck in particular by the clear delivery of Aoife Duffin, Claudia Grant and Oliver Johnstone), niggling questions kept coming from another bit of the brain: why on earth had the translator kept the original German names, like Moritz and Melchior? (Christopher Hampton did the same with God of Carnage and Art, I remember: everyone is speaking in English and then suddenly they are talking abuut  how many francs something costs or some kind of French biscuit. Is this a translator's convention?) And there was the odd odd locution: does anyone really call their teacher 'Mistress' these days? Some plot points seemed to be left over from the original era. I imagine there must be some horrible botched homemade abortions, but surely in 2014 a clinic would normally deal with it? And even given that young people are over-informed by the web and under-educated, some moments of naivety seemed hard to believe. The conclusion, with online answers to the question 'What's right and wrong' led us to the mystifying 'Live in the overlay'. Eh? Make what you want to do the same as what you should do is a stunningly nineteenth-century message in the context.


And still the niggles found their way through the pace and intensity, even leaving aside the painfully unavoidable fact that the actors are obviously not teenagers. The doubling of actors as parents was an ingenious way of economising on cast while making it look deliberate, and I suppose did point out a kind of cyclical pattern as each generation turns into the next. Yet I couldn't help wondering whether many teenagers would go in for this weird practice of pretending to be each others' parents, while the justificatory lines of  'She would say this about my clothes' seemed intrusive. And the starchy repression of Wedekind's world is, necessarily, missing from this account, leading to a lack of clear oppositional tension. I suppose the message that adults today are elsewhere, busy and indifferent, rather than actively countering youngsters' concerns, is a perfectly fair one though. But updates can easily expose essential differences between the world of the original work and today. In the age of Rihanna videos, the kind of awakening he was dealing with is probably a matter of pre-pubescence. Today I learned that a local student earns a few bob a male stripper with his mother's approval. And that's in southern Hampshire. It's hardly the Prussian Gymnasium.


But above all I wondered about the portrayal of teenagers. Writer Reiss says that at 27, she is already something like a generation out of kilter with the latest crop of teens, so that must make me, in my late forties, the old man of the mountains as far as youth issues are concerned. Yet I have met a good number of teenagers and they are not like this - or not just like this. Yes, there is of course a subterranean world played out online which I am mainly ignorant of, and no doubt much of what goes on would shock me, and the horrific stories of vulnerable young people driven to depression and suicide by the casual cruelty of online behaviour should not be diminished for a moment. Yet the fact remains that teens, or at least those I have met, are not solely and monomaniacally obsessed with sex. They read books, they have interests in things like art, music and history. I know children the age of the characters here who want to be therapists and child carers. I know some who sing in choirs, who form bands and play in pubs and love acting Shakespeare. And not one of the above examples is from a private school. Yet in the world of contemporary drama, from Skins to The In-Betweeners to this, teens are often typified along a few common denominators. There are surely other stories to be told.


Well, plays must have a focus and the issues this new Spring Awakening focusses on are undeniably important. Perhaps I was simply in the wrong mood. I yield to the judgment of younger audience members, clearly gripped by a play which spoke of their world and enthusiastic in their reception. And I'm glad to have the chance to see bold new work close by, even if I end up being grumpy about it.
Posted by Unknown at 13:41 No comments:

At last I know what all the fuss is about.  I caught an Encore Live Screening at the Everyman of the NT's great hit yesterday, and was swept up in this great tale of Joey the horse and Arthur Narracott in the trenches of the war. It must have all been said: the simple but beautiful lighting, clear staging, thrilling ensembles and powerful characterisation, evocative music, the blend of comedy and tragedy, the irresistible pathos, the pity of war. And those extraordinary puppets which take on life before you, twitching and snorting and rearing. Their handlers (is that the word) simply become invisible as you believe in the living breathing animal they put before you. Surely never has the Olivier's vast stage been so effectively used, taking us from the farmland of Devon to the No Man's Land of France. Notes to take away: these screenings do make it clear the huge energy of proper voice projection, and area where we must raise our game here. And though South Africa's Handspring Puppet company are I imagine beyond my budget, and their great creations probably beyond our means, I'm  yearning to see puppetry introduced in sour school theatre. A rare and precious art form with a dramatic spell all its own.
Posted by Unknown at 12:49 No comments:

I listened twice to this radio broadcast of Arnold Wesker's 1958 play because I thought it was simply immaculate. This was the Donmar Warehouse production which recently garnered great reviews, and it was not hard to see why: Jessica Raines as Beatie Bryant gives a deeply affecting performance. It was acting as it should be, at any rate for most modern work: you simply forget it's an actress and become absolutely involved with the character and her world. Here is a young woman, exasperated with her rural Norfolk family, in love with a young socialist intellectual, yet not as sure of herself as she would like to be. We sympathise with her while wincing at her naivety. The moment where she hurts her brother's feelings with ill-judged remarks about the territorials, his pride and joy, will have hit the soft spot of all of us who have even momentarily elevated sounding clever above regard for the feelings of those around us. Linda Bassett was equally commanding as Linda the mother, dense in an academic sense yet sharp as a pin;  the scene where Beatie tries to show Linda classical music isn't 'squit' was both funny and very touching. And the confrontation between mother and daughter, the concluding rejection and ensuing self-discovery were simply magical. Plays are so simple, really: if you are drawn in and listening to every word being said, and caring about what happens, then the drama has worked. What writing, too! Wesker apparently based this on his own marriage, yet the play is never a platform for a socialist sermon: rather the shortcomings of the boyfriend Ronnie become apparent every time Beatie praises him, and the gap between left-wing intellectualism and the actual world of the working people - an issue for those today who fondly claim their paper in an academic journal is a valuable 'intervention' on behalf of the downtrodden - is given a moving examination here. At the end of the play, Beatie wonders whether the clever poets and composers could care less about the existence of folk like her family. Give them squit and leave culture to them who knows. It's surely a moment of self-interrogation by Wesker, and a moment in which idea and emotional truth are fused. And the dialect and accent of Norfolk, which I'll take on trust as accurate, were an added pleasure.  The fact that we can get drama of this quality from the radio for free still seems too good to be true, a kind of guilty secret.
Posted by Unknown at 11:00 No comments:

Drama on 3 recently broadcast Lorca's rural trilogy (Yerma, The House of Bernarda Alba, Blood Wedding). I was only able to catch Blood Wedding, in Ted Hughes's version, first broadcast in 2008. I think the first encounter I had with Bodas de Sangre was the opera by Nicola LeFanu, which Rosie Williams led a trip to all the way back in 1992 (my wife and I still merrily sing the first jolting line, 'Give me the knife' to each other, at appropriate moments). Reading the original later brought home to me Lorca's absolutely precise theatrical language: symbolic colours, in both scenery and language, the brusque and controlled rhythms of the writing, the purity of the whole conception. Lorca was not a poet who did occasional theatre. He was a prolific playwright, saturated in the repertoire, and a founder member of a company, La Barraca, which took Spanish classics to remote places. In Bodas de Sangre, the sense of the visual and physical is as strong as the verbal - with a radio play, the imagination becomes the designer, conjuring sun-drenched plains and moonlit forests at the prompting of the words.

Now that we're  so familiar with TV realism, these symbolist works of nearly a century ago have a peculiar freshness. Hughes's account is surely right to lift the work beyond Spain (where a real event in Almeria inspired it) to a universal plane: feuds, love, the battle between passion and social pressures are, after all, part of the human experience from Andalucía to the Andes and beyond. The northern accents of the radio version fell nicely into place. Every time I experience it, the opening out into the dream world after the lovers flee seems magical: the voices of Death and the Moon, the shimmering imagery, the homing in of the inevitable and tragic conclusion. There are various complete versions in Spanish on YouTube, including a 1938 film and Carlos Saura's. Indeed, YT seems very rich in complete Lorca plays in general. In these days of gender transfer, I can't help feeling an all-male Bernarda Alba could have real force if done completely straight. Has anyone ever tried it?
Posted by Unknown at 10:35 No comments: