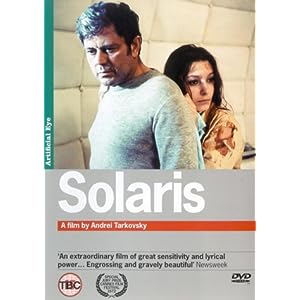 I once read of some research which compared English and Russian schools. One topic was the time a teacher allowed to elapse after asking a question: apparently after a short time we English pedagogues will either repeat it (in a different tone), or answer it ourselves, or single out an individual to give a squirming response. Apparently in Russia the teachers were happier to let more time pass, with no apparent nervousness. They understood the time it takes to think.  I should say I have mentioned this report to some Russians and they have all seem rather bemused and incredulous. I daresay my image of Russian classrooms sitting in hushed Tolstoyan contemplation is some way wide of the mark. But the idea has helped me with Tarkovsky, at any rate. With a film like Solaris you feel you are waiting for the answer for a long time; when it still doesn't come, you think perhaps it was the wrong question; then after a while you forget what the question was in the first place. And this - if you haven't left the room - is the moment when the film has got us, broken through our habituation to a nice wave pattern of suspense and resolution, a narrative logic that satisfies our quest to make sense of the world.

Solaris is perhaps precisely about the futility of that quest. A space station orbits the mysterious sea of Solaris, which seems to be some form of consciousness. The Solaris ocean messes with the minds of astronauts, colonising their minds with hallucinations, extracting memories and recreating them in physical form. A psychologist sent to assess the research is faced with his dead wife, recreated by Solaris, and through this he faces his past, his relationships, his notions of reality. Conversations in Tarkovsky are unique. They don't really progress anywhere: characters throw out one-line profundities - 'Science is a fraud', 'Happiness is a concept which is now obsolete', 'Humanity's salvation is in its shame', 'Not knowing the day of our death makes us immortal'. It's not, at all, of course, at all clear why they are saying these things at the moment they do. If the film can be resolved to something as tidy as a textbook theme it is perhaps the conflict between science and mystery, which the main character contemplates at the end. We are motivated to solve mysteries in the quest for knowledge; and yet in dispelling mystery we destroy ourselves. We need to know and we need not to know. and we need to know that our desire to understand rests on an enormous vanity, for the point of solaria is that it is utterly beyond comprehension.

Beyond this, the drama takes place on a non-verbal plane, as montages of film combine with music and sound with mesmerising effect. I love the way the film collapses the pressurised structure so often associated with the medium: a journey through a modern city becomes five minutes of footage of tunnels and highway, for no other apparent reason than its beauty. The camera will home in on something like an ear simply because - or so it seemed to me - the director felt like it. Yet the ending is enormously powerful, and we do feel something extremely serious is being said. a science fiction film which examines the ideas of both science and fiction. And love, relationships, truth, memory, dreams. I broke it down into two sittings, but if you're a purist you'll watch all three hours in one go, in patient Russian attentiveness. The film is based on the book by Polish novelist Stanislav Lem, who apparently didn't like it very much.
Posted by Unknown at 14:34