In the middle of the lake outside the old Arsenal (now parliament building) in the Ciutadella park we see the sculpture of a forlorn nude woman, classical in design, romantic in her collapsed expressive posture. This is El Desconsol (Grief, 1907) by Josep Llimona (or at any rate a copy: the original is in MNAC - click on the image to get their description). There's also a handy description here (other languages available). Here's my picture (the strategic leaf is a genuine accident of nature!): 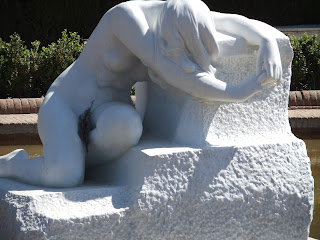 Josep Llimona is perhaps the most celebrated of the Modernista scuptors. He was a profoundly pious Catholic, and with his brother Joan he founded the Cercle de Sant Lluc, devoted to moral regeneration in art and the nation (the world, the universe ...). Gaudí was the most famous member of this fun-loving club. Llimona's sculptures unsurprisingly tend to have a clear morally persuasive force. Other examples of his work can be seen across Barcelona: among them the frieze on the front of the Arc de Triomf, the Dr Robert monument, the statue of St Jordi on Montjuic, and a memorial to victims of Napoleon (which I once had to explain to a Frenchman: 'triste souvenir' was his rather beautiful response). For a useful list of Llimona's works, see the gaudiallgaudi page.

For the flavour of this interesting artist, here is a powerpoint of some of Llimona's works, on display in MNAC and the excellent, recently opened Museu del Modernisme Català. All in marble apart from the one bronze:

Other sculptors to look out for in a similar style are Enrich Clarasó, Eusebi Arnau, Josep Clarà, and Josep Reynés. A very good book on the period is Barcelona and Modernity, the catalogue for a major exhibition which took place in America in 2006-7.