Journeys through The Waste Land

The Waste Land (please note: it's two words) starts with the disinterment of the dead, and perhaps the first thing we need to do when we meet it - or meet it again - is disinter it from the layers of commentary, opinion, and received wisdom that have settled over it. Not that these things are useless: we just need to travel over this strange place for ourselves a few times before looking for a companion. 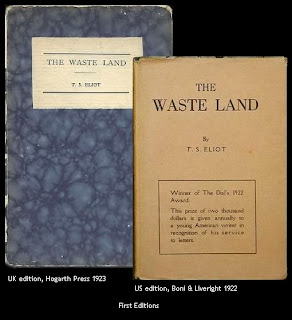 We also need to find some way of navigating it that doesn't make us feel too lost. (One way of doing that is to enjoy feeling lost, of course). Another was suggested to me recently by reading the French novelist Alain Robbe-Grillet's introduction to his screenplay for the equally perplexing film directed by Alain Resnais, Last Year in Marienbad (1961). Robbe-Grillet says that the film was "an attempt to construct a purely mental space and time—those of dreams, perhaps, or of memory, those of any effective life—without excessive insistence on the traditional relations of cause and effect, nor on an absolute time sequence in narrative." That seems to me a pretty good description of The Waste Land, and Robbe-Grillet's advice to the viewer can help us here too. The viewer can, he says, "react in two ways: he can try to construct some Cartesian scheme, as lineal and rational as possible, in which case the film will seem difficult, if not incomprehensible; or instead, by contrast, he can allow himself to be transported by the extraordinary images projected before his eyes, by the voices of the actors, by the sounds, by the music, by the rhythm of the montage". I suggest that we should, at least in the first instance, read The Waste Land like this, as a series of images and speeches that follow each other as in a dream, following some subterranean or emotional current perhaps, but not spelling out a logical sequence. It is an extremely dramatic poem, and it is always a good idea to listen to it. Here is a reading by Eliot, Ted Hughes and Lia Williams, put together for Poetry, Please. Close your eyes, and let the music play on your imagination.

Online study
Still, we cannot shut out entirely the rational bit of our mind (left hemisphere?) which wants to make some sense from this collage of voices. There are mountains of criticism and scholarship - indeed, one wonders how many poems of 434 lines or so can have generated this much secondary material. First we might want to know what the poet himself thought. Eliot referred to The Waste Land at various points in his life, and in a rather contradictory way. There are some interesting comments in the Paris Review Interview, 1959.

Allusions and references are recorded in Southam's book A Student's Guide to the Selected Poems of T S Eliot, and can be studied on screen in this hypertext edition.

Another hypertext is offered on the Exploring the Waste Land site.

Keeping up with technology, there is an ipad Waste Land app. I have yet to use it (not having an ipad), but it had been well reviewed and the contents are certainly impressive.

An offbeat and stimulating approach is provided by graphic artist Martin Rowson, who has hardboiled detective Chris Marlowe tracking down the allusions on the mean streets of crime noir. Out of print, about to be reissued.

Study guides
Advanced
That is plenty to be going on with, and certainly enough for any sixth form exam on the Selected Poems.  But if you're still hungry you could try:
By which stage, we might feel we have buried the poem in explication and it is time to start the whole process again.
Posted by Unknown at 10:25