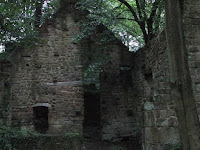 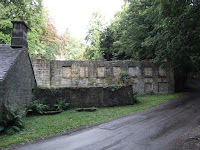 We recently visited Matlock in Debyshire, and stayed in part of a converted Mill complex in the Lumsdale Valley. This is a wonderfully atmospheric spot: following Bentley Brook down the steep wooded valley are the remains of at least six old water mills, dating from the 17th to the 19th century. 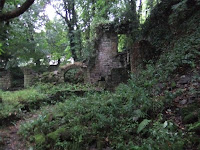 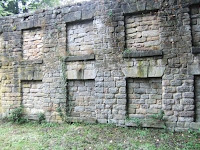 The mills were used to grind various materials, including bone (for fertiliser), corn, gunpowder, cotton, lead, and minerals for paint, and the earlier ones predated the more famous mills run by arkwright at Cromford. They seem to be crumbling back into the greenery, but they have been studied and looked after by the Arkwright Society, who leased them from an admirable-sounding lady called Marjorie Mills, who had bought the valley in 1939 and refused to demolish the mill buildings. Thanks to conservation work, the crumbling has been slowed down, and many details are still very clear. (There are guided walks, but alas none on the days we were there.) The BBC featured the Lumsdale Mills in 'Britain's Hidden Heritage', and as I remember were particularly interested in the fact that Arkwright's ideas were employed by entrepeneurs here, raising questions about patents. For an expert account of the Derby mills, see the article by Professor Chris Wrigley, available from the Historical Association. Next to Chatsworth, Haddon Hall etc., Lumsdale is a lesser-known star in the Derbyshire galaxy, which of course adds to the satisfaction for the visitor. 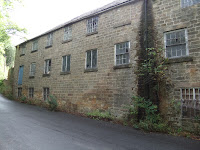 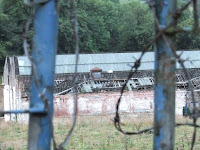 Right at the bottom of the valley are some grim-looking industrial buildings from a later date. Are they still used for anything, as warehouses perhaps?Acknowledgdements to the sites linked above, and to 'From the Neolithic to the Sea'.
Posted by Unknown at 11:59