In Jane Austen's Persuasion (1818) we are told that the heroine, Anne Elliott, is "an extremely pretty girl, with gentleness, modesty, taste and feeling". It is one of those lists of epithets in Austen that seems at first comfortingly familiar, and then elusive. What does it mean in this world to have 'feeling'? What kinds of behaviour make up 'gentleness'? And what would the first readers have understood by 'taste'? Any one of these words can start us on an archaeological dig into the various concepts at work int he novel: we need to investigate them, because it is against these values that we make sense of the action. On the subject of taste, I found a programme in the In Our time archive very helpful, and I offer some notes on it here. But better still, listen to the programme directly: there's a link at the end of this post. 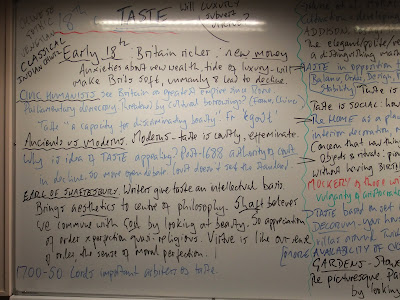 In the early eighteenth century Britain was commercially successful, surpassing its nearest rival Holland. There was new wealth pouring in, and much of it was spent by the newly wealthy on luxuries. Over the centuries, these consumables ranged in style from classical and gothic to Venetian, Indian and, of course, chinoiserie. All this money and luxury led to some concerns, not only the perennial anxiety over arrivistes enjoying a status previously reserved for those of noble blood (returning to Persuasion, we might think of Sir Walter's dislike of naval officers for just this reason a century later). It was also feared in some quarters that the enjoyment of luxuries would lead to a moral decline: Britain was the greatest empire since Rome, and a parliamentary democracy, superior to the effete court of absolutist France. Would this identity be threatened by cultural borrowings? Would the manly Brits go soft, stroking their new lace fabrics instead of staffing the empire?

With so much new stuff (literally and figuratively) coming in, and merchants climbing up the class ladder, some principle of discrimination seemed desirable. How do you know what is really good, how do you separate quality from tat? The ability to do this is taste, French 'le gout', "a capacity for discriminating beauty". There was more openness for debate about such matters in Britain: in France the court basically set the rules, while in Britain since the Glorious Revolution of 1688 the court was much weaker and there was room for other authorities to emerge.

Writers were one such source of authority. As they became interested in the question of taste, they gave the notion an intellectual basis. One of the most important intellectuals was the gentleman philosopher, the Third Earl of Shaftesbury (1671-1713; in the first half of the 18th century the nobility had an important role as the arbiters of taste). He brought aesthetics (the study of beauty) to the centre of philosophy. Shaftesbury made a link between beauty and religion: he believed that we commune with God by looking at beauty, which is characterised by order, harmony, and proportion. These ordering design elements are in turn analogous to the internal ordering needed for the virtuous life. Hence discriminating perception works together with ethical judgement. Virtue is our sense of moral order and perfection, analogous to our intuitive approval of the rightness of a building's facade. The enjoyment of beauty, the moral life, and the understanding of the divine are all linked. 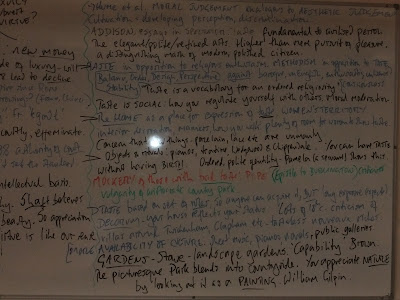 From this analogy drawn between moral and aesthetic judgement, it followed that it was desirable to develop one's powers of perception and discrimination, to become cultivated. For Addison (1692-1719), in his essays in The Spectator, this quality was fundamental to a civilised person. Acquiring a sense of the elegant, polite and refined arts was higher than the mere pursuit of pleasure: it was the distinguishing mark of the modern, polished citizen.

In any period, ideas develop in opposition to other ideas. This was the case with taste in the eighteenth century, which was conceived partly in opposition to religious enthusiasm, as practised by non-conformists such as the Methodists. On the one hand there is balance, order, design, perspective, reason, stability; on the other there is the baroque, the unlicensed, wild, effusive. For the proponents of taste, the first set is identified with Englishness, making the second alien and a little suspicious. Taste thus provides a vocabulary for both the inner and outer life: it indicates an ordered religiosity within, and governs the way you comport yourself in society. And it identifies you as a loyal Englishman.

Unlike the political arts, which could only be practised in public, by men, the art of acquiring taste could be pursued and expressed in the home, the territory of women. It was possible for women to demonstrate taste through their choice of decoration, their manners, how they walked. The objects and rituals of the home - teatime served in Wedgewood China, Chippendale furniture - all betokened taste. It was not the privileged domain of the aristocracy, or even the gentry: in Richardson's novel Pamela (1741), the eponymous heroine shows a higher standard of discrimination than those of higher social standing. You can advertise your taste simply by behaving in accordance with certain rules, and rules are not expensive. Culture was more available: this was the age of the first public libraries, household pianos, printed sheet music, the novel, public pleasure gardens. Nature itself was perceived through eyes educated by taste in paintings: so under William Gilpin's instruction, travellers learned to search for 'picturesque' landscapes, nature which looked like a picture; while landholders could have their parks remodelled by 'Capability' Brown (so-called because he assessed lands for their 'capability', that is potential for landscape treatment) to suit the idea of what the countryside would look like if it was tastefully designed.

Cultivation was no longer the hobby of the wealthy elite. Fanny Burney's Evelina (1778) depicts a London where cultural pleasures are readily available. Indeed, vulgar aristocrats were mocked: Pope's Epistle to Burlington satirises a vulgar country estate (and in so doing implicitly praises Burlington's refined neoclassical sensibilities, as exemplified by his Palladian house at Chiswick). The nouveaux riches and their fancy houses at Twickenham and Clapham all came in for a bit of bashing too. (We could add that Gilpin was himself satirised in Thomas Rowlandson's Doctor Syntax drawings.) Beneath it all was an unresolved question: could culture simply be acquired by anyone with sufficient income? Or did you have to be born into it?  Which middle class groups have got it right? Who are the tasteful and who are the vulgarians? The new form of the novel was itself hard to pin down: Richardson teaches the proprieties, yet as a mere tradesman - he was a printer of humble background - he was regarded as an impertinent upstart by aristocrats like Lady Mary Wortley Montagu (1689-1762). In the early nineteenth century, judgements of taste course through the novels of Jane Austen.

The British Empire was a source of this diversity and confusion. The British colonies allowed for self-creation, unstifled by hierarchy. At home, a more mobile society allowed for self-invention too. The basic story of the eighteenth century novel is someone become a lady or gentleman, displaying the taste and attitudes necessary for that status. the But there was always a need for an authorised code of what was tasteful and decorous. And once that code is known it can be deployed to exclude others. In the nineteenth century, the obsession with taste fades.

An interesting discussion, though as one contributor mentions, it somewhat collapses chronology in teasing out the big themes. It  leaves us with the question of where we are today, taste-wise. Can 'good taste' be taught? Is 'tasteful' - as Amanda Vickery says right at the end - today's ultimate put-down? The word itself, like all evaluative terms in England, is inevitably involved with class and money, and is often avoided for that reason. But it seems to me that, whatever term we employ, taste is still operative, though in discrete areas, not as a universal code. The communities around rap music, opera, handbags and National Trust houses will all have their ideas of what's proper, what's cool or naff, and individuals will absorb this code more or less consciously. We still define ourselves by what we like: do you find Downton Abbey a Sunday evening pleasure, or ghastly soft heritage, for example? Do you pronounce your refinement through not going to Guy Ritchie's Sherlock Holmes films, or is that the attitude of a self-important snob? We'd like to think we at least have our own answers to such questions, but I suspect we look around us for the 'right answer' just as much as our eighteenth-century forbears did. Our identity is to a large extent constructed by society, or the bit of it we find ourselves in, and many of our opinions are consequently the received opinions of that group. Perhaps it is a romantic fallacy to think things could be otherwise.


The reading list on the In Our Time page makes me feel very ignorant, but one book I have read, and would recommend is John Brewer, The Pleasures of the Imagination. Not in the reading list is Shaftesbury's Characteristics of Men, Manners, Opinions, Times (1711).
Posted by Unknown at 07:24