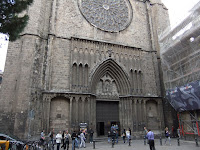 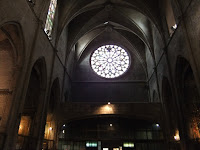 The church of Santa Maria del Pi, situated between the Plaza del Pi and the Plaza Josep Oriol, is a gem of Catalan Gothic. It is composed of a single, very wide nave of seven rectangular bays (each ending in a side chapel), leading to an polygonal apse. The whole is enclosed by a simple ribbed vault, and conveys a powerful sense of a unified, vessel-like space, dimly lit and without distracting ornamentation. The articulation at every point is clear and unostentatious, and the feeling of a kind of pure blankness continues on the exterior too: since the buttresses are largely contained in the interior, where they divide the side chapels, the external walls are predominantly bare (an advantage for a church built in a confined space). Steese notes the 'quality of curve' of Cataln Gothic, less pointed than the northern variety.The architecture is testimony to the power of the Barcelona Counts in the fourteenth century, and at the same time an embodiment of an austere piety. 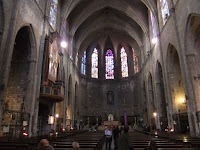 There are more details from the links. The Western entrance, flanked by two towers, is well worth close scrutiny: note the pinecones in the tympanum (there was a said to be a pine wood in    this area) denoting the Virgin as the Lady of the Pines, the sculptures of the Virgin and apostles on the lintel, and the blind arcading, severaly enclosed. String courses denote the stages of the facade with the same clarity as the vaulting delineates the bays inside: indeed in many ways Catalan Gothic has features characteristic of the Romanesque. and there is a genuine Romanesque survival carvingint eh carvings on the Avemaria Entrance (clearly they re-used extant materials). A great feature is the octagonal belfry, a century or so later than the rest.
The story of Santa Maria del Pi takes us through a wide arc of history: there may or may not have been a PaleoChristian church here, but there certainly was a Romaesque one in 987. The octagonal belfry, which houses six bells, dates from the second half fo the fifteenth century. The present structure was damaged in the earthquake of 1428, and again in the calamitous year of 1714. It was badly burned in the Civil War in 1936, and subsequently restored, though many of the furnishings were lost. The magnificent rose window was reconstructed under Josep Maria Pujol, 1939-43, and the statue of St mary at the East end was made in 1973. Not just a Gothic remnant, then, but a living tradition.

Sources.
Generalitat Catalan Gothic guide
Wikipedia (as often with BCN topics, there is much more information in the Spanish / Catalan version)
Description on Catholic Barcelona blog
Geocities page on S Maria del Pi
Edward Steese, 'The Great Churches of Catalonia', Parnassus (7:3, March 1935), pp 9-12. [Not much on this particular church here, but it's a nice overview of the Catalan Gothic style].
Posted by Unknown at 12:16