Terry Eagleton, How to Read a Poem 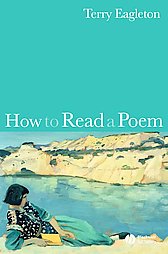 I've just caught up with Eagleton's book on the close reading of poetry. It might seem a surprising choice of subject for a writer so associated with literary theory, but Eagleton's first point here is that Theory and Practice in the reading of poetry are partners, not enemies. And indeed this must be true: when we read a poem we are inevitably operating in some framework of ideas about the sort of thing a poem is, what it's for, what reading it involves etc. These are plainly matters of theory. Conversely, ruminations on signifiers and the like will at some point bring us to an actual text and its inner workings. Why in any case would one want to use Practical Criticism as a safe haven from the big questions? if it's a hermetic verbal workout you want, do a crossword.

Eagleton's book starts with potted accounts of concepts like formalism, rhetoric, imagination, poetic language etc, some of it familiar from Literary Theory and other works. His affable blokey style can crystallise an idea nicely, but it can also sound glib. Some will like the gags with which he ties up a point, but I found them tedious and learned to skip over them by the end. On the evidence of his writing, Eagleton has a naturally combative temperament and is animated by the sensation of fighting some enemy or other, whether real or imaginary. A deft chapter on the ways in which content and form can work against each other concludes with a surprising ululation of victory: 'Part of the point of this exercise has been to challenge the piety that the two always form a harmonious whole'. Always? Did anyone else notice this piety that needed challenging? There are some odd lurches of tone. Van Morrison is accused of over-performing traditional music - a somewhat laboured illustration of the constratints of possible interpretation  - and then we are told, 'It is as if Morrison's performances in this field reflect a flawed epistemology, surprised though he would doubtless be to hear it'. Is this anything more than a sneer?

Still, these are minor irritations. As an introduction to reading poetry, this is one of the best I've come across. Eagleton establishes poetry as a moral activity, in its older and wider sense: 'a qualitative or evaluative view of human conduct and experience'. This brings the activity into a proper light: Practical Criticism can easily descend into pointless labelling (there's alliteration in line 3!), but Eagleton's own readings show us the much deeper rewards that come from following a text as it leads us into the shifting texture of the felt life. The analyses he presents (based on a surprisingly canonical set of texts) deal acutely with the formal and stylistic properties of poems, while always relating these to their emotional and intellectual life. In considering how texts might transmit the consciousness of their age, he is persuasive but also rightly tentative. Eagleton's style is a matter of taste, but he is convincing about the things that matter.
Posted by Unknown at 01:39