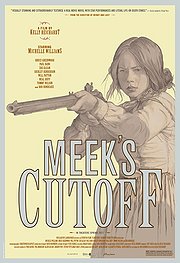 The Meek Cutoff was one of the Oregon trails followed by pioneer settlers in the nineteenth century. The route was a short cut created by mountain man Stephen Meek. In 1845 Meek guided a train of 200 wagons, with some 1000 travellers, across arid plains, a journey during which 23 people died in the desperate search for water. The Wikipedia entry has pictures of a tombstone of one of the victims and a branch on which 'Lost' has been carved (a detail picked up early in the film). The experience was clearly hell on earth. 'Tuck what is called Meek's cutoff ... a bad cutoff for all that tuck it', writes one Samuel Parker: 'I will just say, pen and tong will both fall short when they gow to tell of the suffering the company went through'.

For some viewers, pen and tongue also fell short in describing the tedium of Meek's Cutoff (2010), Kelly Reichardt's film based on this crossing. Personally, I found it an absorbing and increasingly tense experience. Bringing the size of the party down to three families and Meek (I would imagine an unlikely scenario), Reichardt brings out the tension between families and guide (who is clearly lost), touches on issues of gender, and places the pionering evangelism of the pioneers against the endless indifference of the landscape. The capture (we're not shown how) of an Indian, and the decision not to subtitle his speeches, takes us into different attitudes to the Other. The ending is open, which annoyed some, but this is surely a familiar trope (cf John Sayles' Limbo (1999)), and there are at least suggestions that water and deliverance is not far away.

Above all, the film brings out the exhausting parched slog to the promised land, with the women in long dresses and bonnets walking behind the creaking, fragile wagons (actually sitting in them would have been a lethally bone-ratttling experience, it would seem). Existence is stripped down to the task of endurance and the rhythm of expectation and disappointment: will the next valley bring water or more desert? Helplessly following the Indian, the travellers live with a terrifying unknown. Is he leading them to water and life, or to death in some ambush? Dialogue is spare and resonant with unspoken fear. Eerie music floats across the scene from time to time, and the photography is mesmerising. The film took me well away from my usual zone, to websites on trails and a fascinating LRB article (33:24) on the Comanches. This is film as a record of the human journey as something harsh, elemental, inconclusive and troubling; and if you like that sort of thing, Meek's Cutoff is a trip well worth taking.
Posted by Unknown at 03:25