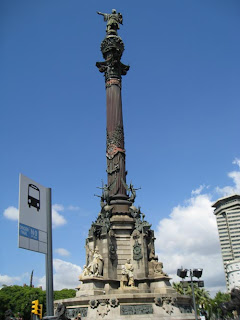 The Columbus Monument which looks out over Barcelona's harbour is a striking landmark. Although the first stone was laid on 26th September 1882, it was not inaugurated until 1st of June 1888, the year of the Universal Exhibition (which opened on 20th May). Consequently it is closely associated with that event and its great themes: the celebration of modern industry and industrial materials; Barcelona's pride in its own economic and industrial growth, as it puts itself alongside Paris and London; and  Catalonia's assertion of its rightful place in centre stage in Spain. The monument's neoclassical, heroic figures (the work of several Barcelona sculptors) clearly articulate a confidence in - or nostalgia for? - imperial power, just ten years before Spain was to lose the last of its colonies in the disastrous war of 1898.  Like other works of the late nineteenth century the Columbus Monument makes a statement about the present through its representation of the past. The various elements make up a complex symbolic whole, and the entire piece needs to be read as a narrative to make sense.

Here is an introductory video by World Site Guides, with the calming background music that seems to be deemed essential for such productions:


Detailed information, with excellent illustrations, is given in Peter van der Krogt's remarkable website on Columbus monuments around the world.

As with all Barcelona monuments, the essential local source is the Art Públic site, which also appears with suitably calming music. Remembering the date (1888), the entries on the monument can be found in a few clicks.

as for the great question, was Columbus in fact Catalan? The case is summarised here, and discussed in exhausting detail on the Catalan Wikipedia entry.