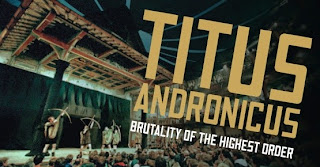 Lucy Bailey's production of Titus Andronicus has been revived and is currently on at The Globe. What a spectacular experience, a 16th-century play sending into shock an audience brought up on Saw and Tarantino. The staging effects initially seemed straightforward, nothing remotely scary: a semi-awning over the pit, braziers, weird sounds of hammering and sawing; yet over the evening these grew into something dark and strange. William Houston was electrifying as Titus, suffering from some kind of mental pain at the outset (the soundworld of Django Bates brings this out brilliantly), drawing us into his private hell scene by scene. Superbly judged use of comedy: the use of Aemilius / Bacchus was terrific. The big lesson I got was to juxtapose comedy and savagery, which I suppose is obvious and pure Tarantino come to think of it. Indira Varma chilling as Tamora, Obi Abili charismatic as Aaron. Flora Spencer-Longhurst well-nigh unwatchably affecting as the mutilated Lavinia.

Moving some actors around on scaffolds brought out the political nature of the piece, though at the cost of slowing the thing down: watching extras trundle platforms along is not very exciting. The mob chants and sudden violence around it were properly alarming, though. Effects brutally er, effective, and the vengeful slaughter of the brothers made me think nervously, I trust they've had medical advice on this ... Plenty of press stories of people fainting. I'm sorry to say I didn't see anyone keel over, though I did see a few leave, including one young lady with a hand over her mouth, and the lady next to me (thanks for sharing the blanket, by the way) was moved to shout out on the lines of 'No! What? Why?' on several occasions. Aaron's murder of the midwife is probably the most horrible thing I've seen on a stage. Great stuff. Verse well spoken (for my dodgy ear, Aaron a little soft in one spot), the whole thing stagewise a tremendous lesson in how big things can be made out of simple ideas. Fantastically convincing delivery of this piece. Would have loved to join in the elaborate curtain call more, but had to run for train. Such are the travails of the provincial pedagogue. Managed Creed, Matisse and this all in one day, though. Still in therapy.